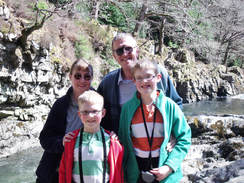 Here we are, looking a bit younger, back in 2013!
We are a home-schooling family, here in the UK, following the GAPS diet to improve our health. Only one of us parents works full time, so we have limited funds to spend on food.

Our site promotes good quality natural food without breaking the bank, proving that it is possible to eat well, heal the body and be on a budget. We don't go in for flamboyant expensive equipment and ingredients, or complicated recipes - we eat real... real food, with real appetites, prepared quickly with the best quality food we can afford. Practical food for feeding a hungry family! We give practical, realistic advice!

I (mum) trained as a teacher and specialise in helping children with special needs to learn to read. Specific resources can be found on our sister site:
www.sounditoutphonics.weebly.com
​
​Hence she is not a doctor and all advice concerning health is given from practical experience, or from personal reading and research.

A member of the medical profession should always be consulted regarding all matters relating to your health.

We hope you stay and enjoy the journey with us. Please read our story, below.
Read the practical implications of starting the GAPS diet here.
We are a participant in the Amazon Services LLC Associates Program, an affiliate advertising program designed to provide a means for us to earn fees by linking to Amazon.com and affiliated sites.
This costs the purchaser nothing extra.
​In this way I can continue to provide free resources.
Thank you for your support.
We started the GAPS diet in Feburary 2016. Here we introduce ourselves.
Seven years ago I was telling my friend that Son 1 was anaemic and she gave me a copy of 'Nourishing Traditions'. I read it and must admit I thought it the weirdest cookbook I'd ever read, If you've never heard of it, it is a book calling us back to traditional ways of preparing food and advocating not using refined sugar and white flour due to the harm they do to our bodies. It also stresses  that our bodies need natural saturated animal fats, like butter, in high quantities - so flying in the face of  'politically correct nutrition and the diet dictocrats' (Nourishing Traditions by Sally Fallon).
It made sense, but I'd never heard of soaking grains, or fermenting vegetables!  We liked the idea of cream and butter though, so we ditched the margarine and semi-skimmed milk. It was rather hard to cut out sugar, but we did reduce the amount. I stopped buying 'Ribena' and 'from concentrate' juices and switched to letting them have a centimetre of freshly pressed pasteurised juice in a glass of water once a day. Husband has always been happy drinking water, so they were happy to copy him. We also stopped having boxed cereals and started soaking our breakfast grains. Husband loved his with LOTS of cream! I was given a bread maker and started making my own wholemeal bread.
I began to suspect that Son 1 wasn't absorbing his food as he should as we ate plenty of iron-rich foods. A couple of years later he was vitamin D deficient too, and then anaemic again and this continued on and off. I did lots of research on the web to see if anything would help him, and did find the GAPS diet. I read all about it, but realised the chances of my family ever coming off their chocolate and cakes was very slim, so resigned to forget the idea and carry on doing my best to help him.

Every now and then I would pick up Nourishing Traditions and have another look. Gradually I replaced more and more foods with home-made alternatives. But sourdough and fermented vegetables still seemed rather extreme. I did try experimenting with soaked bread, but never found a suitable recipe until very recently on the Weston Price Website.
Fast forward to finding GNOWFGLINS  http://gnowfglins.com/ and here was a wealth of practical help! Thank you Wardee, you have so blessed our family. I was so taken up with trying recipes and learning new skills - yes soaked grains became the norm and now I'm into dabbling with fermented vegetables!  I have even got to grips with sourdough, though sadly it's been put in the bin while we do GAPS, but I know that I have a store of delicious recipes to turn to if we can put grains back in our diet eventually. Just by making this small change, my son hasn't been anaemic for some time and looks rosier than he ever has. I (wife) have had tons more energy and no longer wake with a tired dragging feeling behind the eyes. Son 2 hasn't had an asthma attack for over a year.
So we know that the food we eat has a big impact on our health and can see and feel the difference that eating more nutritionally
brings.

And then through Wardee's website I found eat-beautiful http://eatbeautiful.net/ and bought Megan's 'Grain Free and Lovin it' cook book. This took my baking on to a new dimension as I experimented with baking with nuts. I held on to the  thought that if I could convince my family they could eat well on the GAPS diet, they might be persuaded, but it became a sort of threat. Eczema was a sign he needed GAPS! Asthma? GAPS. I think my hinting wore thin! .....Until husband became ill. I did lots of research on the internet and found to my surprise GAPS could help autoimmunity too, i.e.. Graves disease for us! Well I never. Did I dare suggest it?

Well, thanks to these two lovely ladies, my family know that when we get onto full GAPS we can enjoy eating - and REALLY ENJOY eating! So much so, that although we all fear getting through the intro stage, we are (at least the parents) 100% committed to trying it.
This diet is only temporary, so hopefully, before too long we can return to our sourdough - but hopefully leave our dependence on grains and sugar behind.

Why did we call our site Mind the Gaps?' Simply because when we started out, it felt as it there were going to literally be many gaps in our diet - things we loved that we had to leave out. Not all unhealthy - things like potatoes and parsnips. Now we are veterans, we don't mind the gaps so much. When Son 1 was asked recently if he misses 'normal food' (whatever that is, but we presumed it meant non-gaps legal foods), he replied, 'No, I'm so used to GAPS diet food.' And so we are.

We hope our journal is valuable to someone. We have certainly valued other peoples experiences that they have so kindly shared, especially Cara Comini at Health, Home and Happiness http://www.healthhomeandhappiness.com/ and Jennifer Scribner  http://bodywisdomnutrition.com  and Melanie Christner at Honest Body. http://www.honestbody.com/
Thank you to you all!
Read the practical implications of starting the GAPS diet here.