We did not start GAPS with lots of money to spend on organic food. So we cut our cloth accordingly. On average, for four adult size portions we spent between £100 and £125 a week (2016), which was our average bill previously. Expensive sweet things were rationed e.g. good quality honey, organic fruit, whereas essentials like organic butter/sour cream etc... we were happy for them to eat lots of, to fill them up! There was an initial outlay for cod liver oil and Bio-Kult, along with glass storage jars. 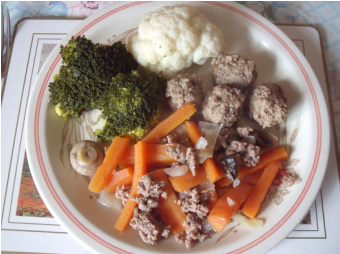 When I first tried to find out what we could eat at these early stages, most people only listed the vegetables Dr. NMB had actually stated: carrots, onions, broccoli, leeks, cauliflower, courgettes, marrow, squash and pumpkin. But there is an etc... at the end of the list, but few would expound on the list. So I was delighted when I found a longer list which included beets, brussel sprouts, collard greens, eggplant, garlic, greenbeans, peas, peppers, spinach, tomatoes, turnips and watercress. This really opened life up! We did choose to keep tomatoes out of the diet at least to start with and in the end didn't introduce them until stage 6.

So what worked for us?

Give your soups a name - rather than just 'another bowl of soup'. The Sons liked it if a chicken one was 'Chicken stew soup', or 'sausage casserole' (with home-made sausages). It somehow made it seem more appetising when this was all you were eating. Make sure you add a generous amount of fat (lard, beef tallow, goose fat etc..) to your soups to increase your fat intake and keep you full up for longer!

Try differing the colours, so they don't all end up a muddy brown: Tomatoes? Red. Pea? Green. Beets? Deep Red. Carrots? Orange.
Don't feel that you have to put lots of veg. in all soups. Onion was a basis for them all, but sometimes only one or two veg was best so you don't get fed up with the same flavours.

Vary how you serve your meals. Here are some variations:
Meat/fish hot/cold on side plate with thick smooth/chunky soup in bowl. Fish was nice served with peas.

Meat/fish served in the bowl with most of the soup smooth but the vegetables chunky. We particularly liked cauliflower bits floating in the bowl.

Sometimes the meat was served as a stew, other times formed into meat balls or sausages.

Meat and whole veg served as a main meal, with broth in a mug, or a little broth mixed with carrots/squash to thicken it and poured over as gravy. (See photo)

I tried to make each of the three main meals different to add interest and variety.

The best meals were casseroles - boiled in the oven. These work well with beef or chicken pieces. Just place the meat in a heat proof casserole dish - i.e. not browned first. Then  add vegetables like  onions, leeks, mushrooms, garlic, carrots, frozen green peas, butternut squash or other such veg. Pour over meat stock/bone broth until meat is at least half covered but not totally submerged. Put in the oven. For beef (which likes a nice long slow cook) I like it on 150 for 3 hours, for chicken on 130 for 3 hours. The chicken you can do in a shorter time by turning the heat of the oven up. The chicken gets a nice crispy skin, and the beef is sort of browned on top - all very delicious.

In the first week I had to put in lots of carrots or squash into each bowl to try and fill them up, but that improved by the third week, and definitely once eggs were being eaten en mass! But be prepared for them to be HUNGRY - especially between conventional mealtimes.

I must confess my first taste of meat broth was not favourable. In fact it was nearly enough to make me want to quit there and then. But then we found SALT. My sons didn't know what salt was (I joke but you know what I mean) before starting the GAPS diet, but learning to turn 'dishwater broth' into a delicious meal has become something we are expert in. Leave the salt on the table and encourage folks to put in what is needed. Here in the UK I use Maldens Sea Salt. It's grey, but that means it's not been bleached and processed so should retain all its goodness.

Coconut oil with a little honey was a treat in those early days to tie blood sugar levels over.

Puddings are limited here, but in stage 2 we did treat ourselves to Russian Custard. (See p. 205 of the GAPS book)
​ 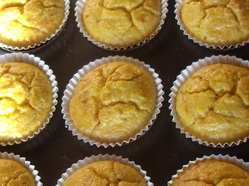 Stage 3 is not much different other than you can add the whole egg if you can tolerate both yolks and whites separately.
We did make pancakes with squash - the proportions aren't given in the GAPS book, but we made up our own recipe:

Mix all in food processor and gently fry.

Son 2 needed this much to fill him up.
Peanut butter we purchased from the health food shop. The 'Meridian' brand is just 100% roasted peanuts, whereas 'Whole Earth' organic peanut butter uses palm oil too.

We didn't then put an egg in each bowl of soup because we couldn't afford it. Husband is a great scrambled egg fan, so he and Son 2 scrambled their 3 eggs. This became our staple breakfast. Once we reached Stage 4 we did institute an egg free day each week to avoid allergies to it, and then we had home-made sausages or fresh mackerel.

For Stage 4 we were delighted to have almond bread. Although Dr. NCM says they have four ingredients, in the recipe she only gives three and I couldn't find a good recipe that didn't used crispy nuts. So this is what I did:

We served these first of all in slices with butter and cream on each slice - it made our little bit go further. Once we were allowed a whole one (what a treat) we used sour-cream as 'icing' and put a dob on top, or scooped some cake away to make 'butterfly cakes'. I didn't know sugarless muffins could be so delicious! Of course you can add a tincy bit of honey too!

We prefer our nuts soaked, so as soon as we could tolerate the given recipe in the GAPS book, we made up our own recipe.  We don't have a dehydrator and can't afford one, so we needed to use our nuts wet. This is my adapted recipe:

Put all into the food processor and whizz until nuts are smooth. It should be a cake mixture consistency.
Both recipes made 12 small muffins. Bake 20 mins at 160 deg (fan).

I have found that Lidl (UK) do nuts at a reasonable price and seem to have a high turn over, which is important to avoid mould issues.

Meat
As far as main meals went at Stage 4, we decided we'd had enough of boiled meat, but this presents a problem. you have to boil meat to get meat stock, which you are still needing lots of. I'm thankful to Cara Comini for her suggestion of buying chicken wings from the butcher and using those to make the meat stock. Plus I found that Morrison's (UK) did packs of beef and lamb bones with lots of meat on, so I could use those. My own butcher supplied marrow bones with lots of cartilage. I know pastured meat is best, but we have no local supplier and honestly can't afford it and Dr. NCM says that organic vegetables are more important than organic pastured meat and some folk have done well  on the diet with ordinary store meat. I buy little supermarket meat, so we are not totally dependent on them.

Chips!
Once we could roast, we reinstituted Friday chip night. I used to make my own potato chips, deep frying in lard, but this time we cut a squash into 'chip's and roasted them gently so as not to get any black bits! They are not too bad with salt on! They do shrink quite a bit, so make more than you think you need. Any surplus can be easily added to a soup. 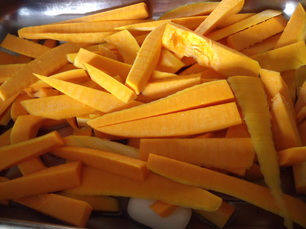 Once we could sauté onions in butter/ghee/lard/other/other animal fat, it made soups taste normal. So the first soup I made was what we called...

In a saucepan, sauté onion until soft. Add all the other ingredients. Add pork stock to cover. Bring to boil and simmer until tender (depending on how soft you are having your vegetables at this stage). Allow to cool briefly, then use a hand blender to puree the fat into the stock. You can leave some of the veg chunky if you like. Serve with apple sauce to stir in.

Stewed apple provided dessert, with/without cinnamon, and with gradually increasing amounts of sour cream. We mostly didn't sweeten it with honey, we really are trying to reduce our dependence on sweet things. We also didn't put cream in our soup, rather put in a slice of butter so that we could use all our cream for pudding.

Mix all together thoroughly. Divide between two 1 lb loaf tins, Bake 160 deg for one hour or until cooked through.
I have a pair of silicon loaf moulds which make it easy!
We served it cold with salad and it made a good packed lunch component too. 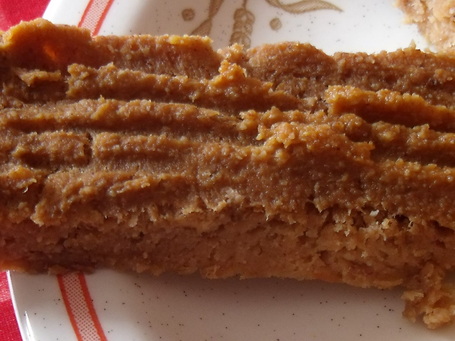 Carrot/banana slice
Once you reach this point, life is an awful lot easier and you nearly feel like you are eating normally - albeit still with a new feel, unless you always had salad for breakfast and never ate potatoes! I think these are the two biggest changes to our diet which we miss most, not that we dislike salad - we like our GAPs breakfast, although it is very labour intensive.

All we really did here was to add raisins/dates to our nut muffins, which did enhance them  a little, and tried apple crumble from the GAPS book and the GAPS birthday cake, which are very nice. We didn't go mad on the honey, or the fruit, it being winter and most of our favourite fruits not in season.

We experimented more with baking with nuts and dried fruit. We are going to try not adding extra honey to baked goods and just use the sweetness of fruit. I will add recipes to the blog as I go along, but here is an eggless, nutless bake (for our egg free days and to use up carrot pulp!)

Place first 5 ingredients in a bowl and mix together. Add apple sauce until you feel it is moist enough. Spread into an 8 X 8 baking dish lined with greaseproof paper. Bake Gas4, Fan 160 deg, 180 deg for 45 minutes. Check to see if top looks dry and it feels springy to the touch. Leave to cool completely. Cut into slices (8 or 10?). Serve with sour cream.

I find that nut-free bakes do take a lot longer to cook than normal bakes, so be prepared.